The Oracle 12C means different things to different people. It all depends on which areas you are looking at, as there are improvements in many areas. Summarized below is the list of Top 12 Features of Oracle 12C as I see it. I have summarized below, the top 12 which I found interesting.

Oracle is doing every thing to jump into the cloud bandwagon. With 12C, Oracle is trying to address the problem of Multitenancy through this feature. There is a radical change and a major change in the core database architecture through the introduction of Container Databases also called CBD and Pluggable Databases (PDB). The memory and process is owned by the Container Database. The container holds the metadata where the PDBs hold the user data. You can create upto 253 PDBs including the seed PDB.
In a large setup, it is common to see 20 or 30 different instances running in production environment. With these many instances, it is a maintenance nightmare as all these instances have to be separately
•Upgraded
•Patched
•Monitored
•Tuned
•RAC Enabled
•Adjusted
•Backed up and
•Data Guarded.


With Pluggable Databases feature, you just have to do all this for ONE single instance. Without this feature, prior to 12C, you would have to create separate schemas and there is always a thread of security how much ever the isolation we build into it. There are problems with namespace conflicts, there is always going to be one public synonym that you can create. With PDBs you can have a separate HR or Scott schema for each PDB, separate Emp, Dept Tables and separate public synonyms. Additionally, 2 PDBs can talk to each other through the regular DB Link feature. There is no high startup cost of creating a database any more. Instead of one instance per day, the shift is into one instance per many databases. For the developer community, you can be oblivious of all this and still continue to use the PDBs as if it were a traditional database, but for the DBAs the world would look like it has changed a lot.
Another cool feature is, you can allocate a CPU percentage for each PDB.
Another initiative being, it has announced a strategic tieup with salesforce.com during the first week of July 2013.

This is one of the top features in Oracle 12C. Data Redaction in simple terms means, masking of data. You can setup a Data Redaction policy, for example SSN field in a Employee table can be masked. This is called redaction. From Sql Develop you can do this by going to the table: Employee->Right click on Security Policy->click on New->click on Redaction Policy->Enter SSN.
When you do a select * from employee, it will show that the SSN is masked.
The new data masking will use a package called DBMS_REDACT. It is the extension to the FGAC and VPD present in earlier versions.
By doing this, whoever needs to view the data will be able to see it where as the other users will not be able to view it.

03. Top N Query and Fetch and offset Replacement to Rownum:

With the release of Oracle Database 12c, Oracle has introduced this new SQL syntax to simplify fetching the first few rows. The new sql syntax "Fetch First X Rows only" can be used.

With this feature, it helps the optimizer to make runtime adjustments to execution plan which leads to better stats. For statements like CTAS (Create Table As Select) and IAS (Insert As Select), the stats is gathered online so that it is available immediately.

05. Restore a Table easily through RMAN:

Earlier if you had to restore a particular table, you had to do all sorts of things like restoring a tablespace and or do Export and Import. The new restore command in RMAN simplifies this task.

The previous limit on these data types was 4K. In 12C, it has been increased to 32,767 bytes. Upto 4K, the data is stored inline. I am sure everyone will be happy with this small and cute enhancement.

The in line feature is extended in Oracle 12C. In addition to Views, we can now have PL/SQL Procedures and Functions as in line constructs. The query can be written as if it is calling a real stored procedure, but however the functions do not actually exist in the database. You will not be able to find them in ALL_OBJECTS. I think this will be a very good feature for the developers to explore as there is no code that needs to be compiled.

You can now create a col with 'generated as identity' clause. Thats it. Doing this is equivalent to creating a separate sequence and doing a sequence.nextval for each row. This is another handy and a neat feature which will help developer community. This is also called No Sequence Auto Increment Primary Key.

09. Multiple Indexes on a Single Column:

Prior to 12C, a column cant be in more than one index. In 12C, you can include a column in B-tree index as well as a Bit Map index. But, please note that only one index is usable at a given time.

You can very easily migrate a partition or sub partition from one tablespace to another. Similar to how the online migration was achieved for a non-partitioned table in prior releases, a table partition or sub partition can be moved to another tablespace online or offline. When an ONLINE clause is specified, all DML operations can be performed without any interruption on the partition|sub-partition which is involved in the procedure. In contrast, no DML operations are allowed if the partition|sub-partition is moved offline.

This feature enables archiving rows within a table by marking them as inactive. These inactive rows are in the database and can be optimized using compression but are not visible to the application. These records are skipped during FTS (Full Table Scan).

Advanced Replication and Streams are Dead. It is being replaced with Oracle Golden Gate.
Invisible Columns. You can now have a invisible column in a table. When a column is defined as invisible, the column won’t appear in generic queries
PGA Aggregate Limit setting:
In 12c, you can set a hard limit on PGA by enabling the automatic PGA management, which requires PGA_AGGREGATE_LIMIT parameter settings. Therefore, you can now set the hard limit on PGA by setting the new parameter to avoid excessive PGA usage.
DDL Logging:
The DDL statements will automatically get recorded in xml/log file if ENABLE_DDL_LOGGING is set to True. ALTER SYSTEM|SESSION SET ENABLE_DDL_LOGGING=TRUE

An Introduction to Entity Framework for Beginners

This article introduces Entity Framework to absolute beginners. The article is meant for developers who are primarily using ADO.NET to write their data access layers. Many experienced developers will find this article very basic but since the article is written from the perspective of beginners, I've tried to keep things simple.

ADO.NET is a very strong framework for data access. ADO.NET has been around since many years and there are a lot of systems running over ADO.NET. Developers who are totally oblivious to the concept of ORMs will probably be asking "What is Entity Framework? What are the benefits of using it and is it an alternative to ADO.NET?"
Well, to answer the first question about what is Entity Framework, Entity Framework is an Object Relational Mapper (ORM). It basically generates business objects and entities according to the database tables and provides the mechanism for: and to answer the second question, the benefits are: and finally, the last question that whether it is an alternative to ADO.NET, the answer would be "yes and no". Yes because the developer will not be writing ADO.NET methods and classes for performing data operations and no because this model is actually written on top of ADO.NET, meaning under this framework, we are still using ADO.NET. So let us look at the architecture of Entity Framework (diagram taken from MSDN): 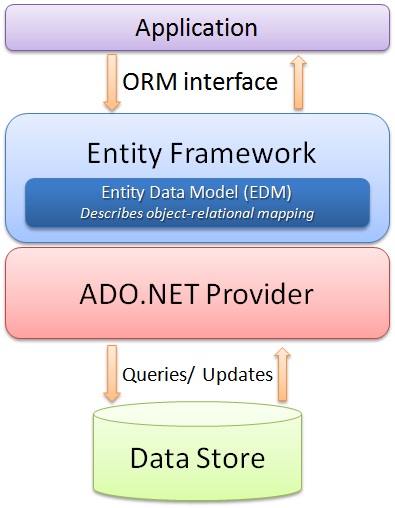 Let's try to understand the ease of use that Entity Framework provides by performing simple CRUD operations. Once we look at the code and how effortlessly and efficiently we can do these operations, the benefits of Entity Framework will become quite obvious.
Creating the database
Let's have a simple database with one table. Let's create a simple table for Contacts and we will perform CRUD operations on this table. 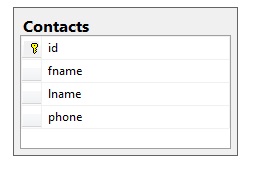 Adding the Entity Model to the Website
Once we have the database ready, we can add the entity model to our website. We can do this by adding anADO.NET Entity Data Model to the website. 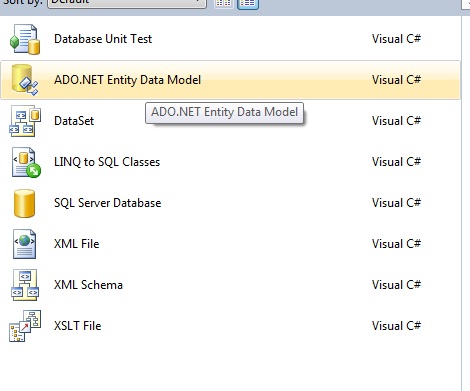 Once we select to add this data model to our website, we will have to select the approach we want to take for our Model's contents. 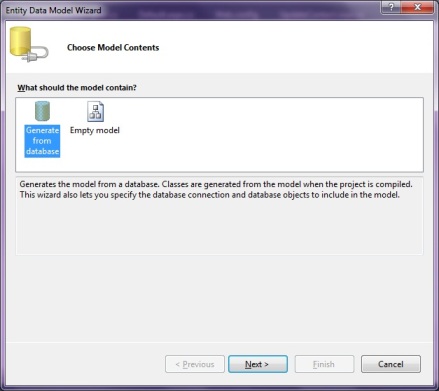 What this selection means is that we can either choose to generate the entity model from an existing database schema or we can design the entity model here and then later hook it up to the database. Since we already have the database ready, we will use the first option. Once the Model is generated, the Entity for each table is generated. The generated entity for our contact table is: 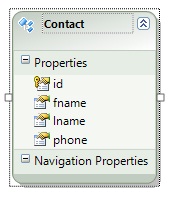 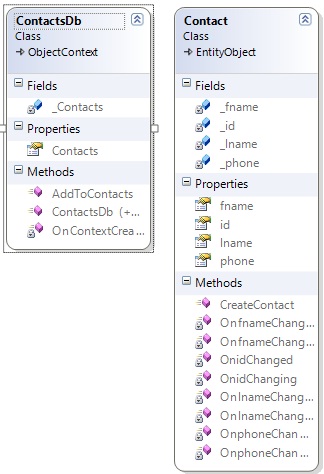 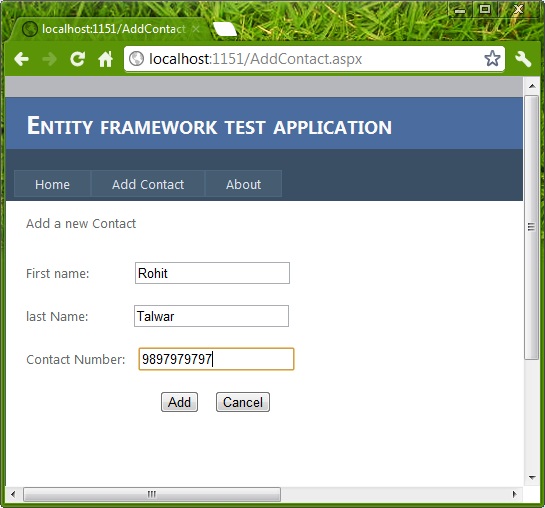 Now once the user chooses to insert the values into the database, the actual data operation can be performed by using the AddObject method of the Model class entity collection. The following code snippet show how to perform the insert.

Contact con = new Contact();
con.fname = TextBox1.Text;
con.lname = TextBox2.Text;
con.phone = TextBox3.Text;
ContactsDb db = new ContactsDb();
db.Contacts.AddObject(con);
db.SaveChanges();
This will insert the record into the table. You can notice the simplicity and efficiency of the code we wrote to perform the insertion.
Reading all the records
There are scenarios when we want to read all records. Let's say we are making a page that will display all the contact information in a single page. 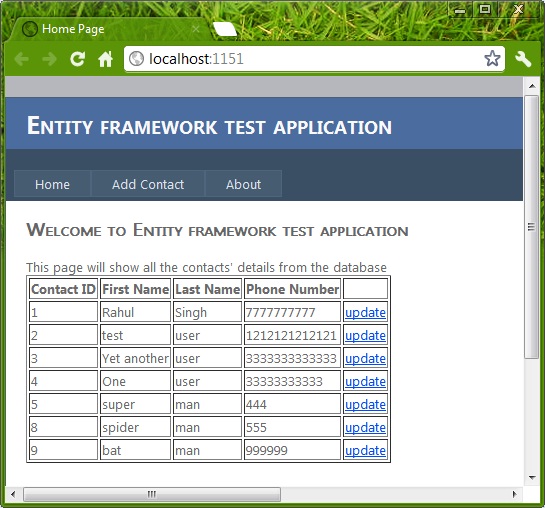 We can retrieve the collection of Entities using the Model object to achieve this. The code snippet below will show how that can be done.

ContactsDb db = new ContactsDb();
Repeater1.DataSource = db.Contacts;
Repeater1.DataBind();
Selecting a specific record
If we want to select a specific record from the table, we can use the SingleOrDefault method on the Model's entities collection. Let's say we want the functionality of updating/deleting a record on a single page then we will first have to select the record based on the ID, then update/delete the selected record. 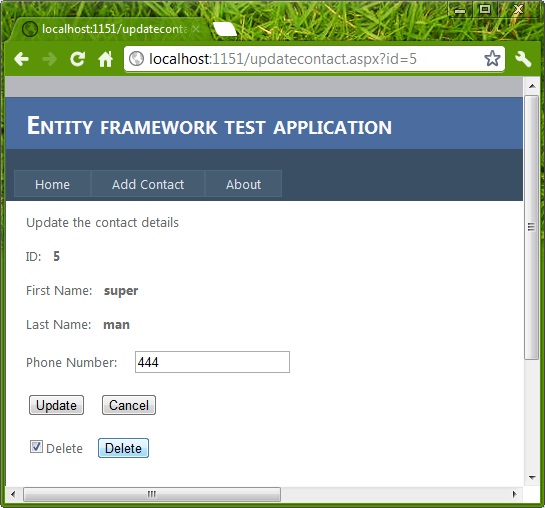 Selection of any particular record (Contact) based on ID can be done as:

int idToupdate = Convert.ToInt32(Request.QueryString["id"].ToString());
ContactsDb db = new ContactsDb();
Contact con = db.Contacts.SingleOrDefault(p => p.id == idToupdate);
Once this code is executed, the Contact object will contain the required values.
Updating the record
If we want to update a record, then a simple update operation can be performed as:

int idToupdate = Convert.ToInt32(Request.QueryString["id"].ToString());
ContactsDb db = new ContactsDb();
Contact con = db.Contacts.SingleOrDefault(p => p.id == idToupdate); con.phone = TextBox1.Text;
db.SaveChanges();
Once this code executes, the value of phone number will be updated by a new value which is retrieved fromTextBox1.
Deleting a record
If we want to delete a particular record then we can perform a delete operation by using the DeleteObjectfunction. The following code snippet demonstrates the same:

Filed Under: c#, MVC, Programming on 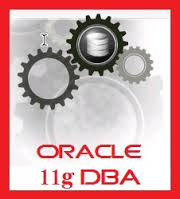